Review of the 4th and Latest CD from Ben Rosenfeld: “Don’t Shake Your Miracle”

Listening to NYC-based comedian and author Ben Rosenfeld’s darkly delightful 4th and latest CD, “Don’t Shake Your Miracle,” you can hear the appreciative audience both shaken and stirred with continuously clever cocktails of dry wit. Ben dishes 71 minutes of salty, fresh prose, which makes extra sense when you learn he was performing in a club over a sushi joint in Manhattan.

As a Jewish and Russian immigrant who’s been fairly Americanized (USA! USA!), Ben Rosenfeld offers a well–rounded yet sardonic view of society. A self–proclaimed nerd and former PhD candidate at Caltech who ditched that project for standup comedy, Ben often serves us bona fide, useful facts, then takes us on a journey through absurdly sick premises and sharp punchlines. The delivery of Ben’s latest seemingly extemporaneous but tightly written long-form set is more polished than ever. (“Don’t Shake Your Miracle” is Ben’s 4th recorded album, with his 3rd, “The United States of Russia,“ achieving #1 best-selling album in comedy on iTunes, and his 2nd album, “Russian Optimism,” reaching top 5 status in comedy on Amazon.)

On “Don’t Shake Your Miracle,” Ben arcs through relatable topics, infusing them with his characteristically twisted points of view, such as an astoundingly fleshed–out comparison of autism to alcoholism. It’s gonna remind you of some people…but, no names mentioned, of course! Yet through it all, new dad Ben Rosenfeld (his daughter is one year old) maintains a vibe of stable cheeriness that makes you actually want to hear him expound on things like “safe teabagging,” or the “alternative approaches” of Poison Control centers in Russia. In fact, Ben’s got a running poison joke throughout the album that is, shall we say, killer.

At one point during the show, Ben offers a choice between “dark or Disney” humor, and the audience wisely chooses dark. The bits are always clever, and sometimes push one or more boundaries hard, blowing through a couple; Ben jumps on a few chances to chide the audience and riff on some of their reactions to great comic effect.

Ben’s wife is also a comic, and this primes the subtext of his jokes about marriage. The topics throughout “Don’t Shake Your Miracle“ include original spins on universal experiences such as interacting with uber drivers, gender reveal vs. sex parties, and the compulsion to make hokey “dad jokes.” We get his immigrant perspective when he spews Russian phrases uttered by his parents as they repeatedly ingrained the perfect blueprint in Ben to become a standup comedian and maybe an astrophysicist.

There were dozens of LOL moments during Ben Rosenfeld’s “Don’t Shake Your Miracle,” and the setups are carefully crafted so that you’re focusing on every syllable as each premise builds to a flurry of punchlines. One of my favorite LOL moments was Ben’s comparison of babies to heroin addicts, which seemed affably accurate, offering up a sickly fun juxtaposition of images. Next time you see a baby nodding off and emptying their bowels in their pants, resist the urge to shake it, and instead, go and listen to “Don’t Shake Your Miracle”, the latest comedy CD by Ben Rosenfeld! 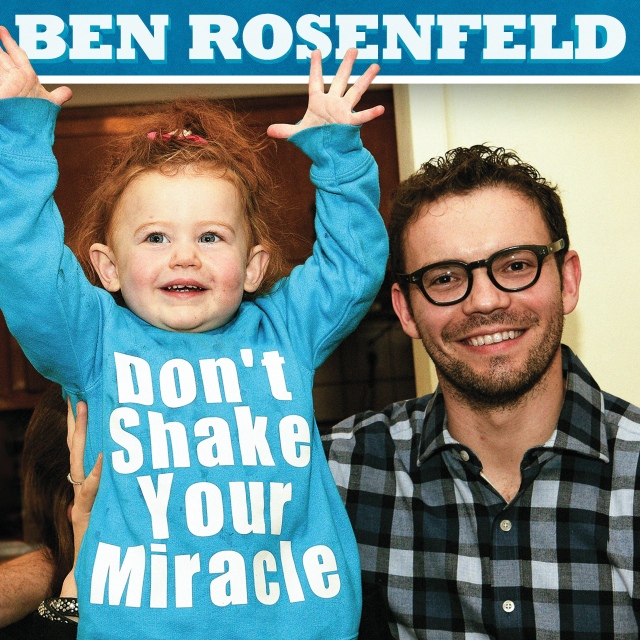