Objects May Appear Larger Than They Actually Are

Many of us have distorted views about body image and nutrition, including the magical number we think we should see once we finally drag ourselves onto the dreaded bathroom scale.

Well, it’s truly not all our fault.  We have been misled.  But we’ve allowed ourselves to be misled.  So, no more excuses:  we can all be “Scared Skinny No More” if we just check out this informative and entertaining new book by Dr. Brad Johnson and comedian/actress/writer Mary Dimino.

“Scared Skinny No More” should be required reading for the entire human race.  It’s true that women tend to be more diet-conscious than men, but the burlier gender will gain great insight into the fairer sex’s weight struggles by reading SSNM.  Guys often have no idea how much pressure we gals are under to be thin.  For many women, it becomes an all-consuming project (if you’ll pardon the pun).

This wonderful (and easily digestible) book is chock full of valuable new information and practical advice for managing, and more importantly, appreciating your very own God-given body.  (And it’s all served up in a highly entertaining fashion, for which we can thank its comedienne co-author.)  The book also presents a number of key points with which I was already familiar, but now see in a new light.

First and foremost:  throw away your bathroom scale.  This is a frequent message throughout SSNM.  I already ascribe to this philosophy, as I rarely get on my own bathroom scale.  But hearing the message repeated throughout this book caused the light bulb to go off in my head (or maybe it was the fridge light last night), and I finally appreciated why I’ve always been so reluctant to get on the scale.  It’s a waste of time and only creates stress.  If you truly “live” in your body, you don’t need a magical number to sense your weight or girth.

The second message in SSNM that really hit home for me was that obesity is the last acceptable (and by the way, legal) form of discrimination.  Being on the average-to-slim side most of my life, I never endured such discrimination directly, other than my son occasionally slapping me on the upper arm so he could laugh and watch the jiggling.  But my father had weight struggles all his life, and he died prematurely at fifty-three of heart disease.  I used to say “corporations killed my dad”, because corporate life was ultimately unkind to him late in his profession.  But now I realize that it was the food corporations that killed him, because he was addicted to food.  He became addicted to food right about the time (it seems to me) that all the new powerful, profit-making chemicals were being introduced into the food market, in the sixties and seventies.  Reading this book put everything into much clearer perspective for me.

Remember that animated movie called Wall-e that came out a few years ago?  Where the human race had turned Earth into a garbage dump, and then escaped on huge star-liners to wander the galaxies on an aimless, centuries-long space-voyage?  Where peoples’ skeletal systems were reduced to near-pulp as a result of the years away from true planetary gravitation?  I was intrigued but scared by the human characters in this dystopian film.  They looked like dirigibles, cruising motionless all day long on individual hovercraft, conversing with holograms while sipping humongous smoothies.  Faux food smoothies.  Wall-e made me acutely aware of (among other things) our society’s nutritional perils.

Faux food – that’s what so many of us are subsisting on these days, especially (and most alarmingly) children.  SSNM makes clear the vulnerability of kids, and how they can’t differentiate food company ads from reliable dietary advice.  Though my generation endured its share of misleading commercials, I don’t think we were getting tooled anywhere near as bad as these kids today.  The food industry is so much more powerful now.

And I don’t know why I’d never fully grasped before that junk food addiction is a bona fide physical malady.  The research described in SSNM concerning kids’ gullibility to deceptive food industry marketing practices was especially compelling and distressing to me.  My thirteen year-old son is very smart, but he still falls prey to the unspoken messages in processed and fast food ads on TV.  He often believes they have a factual, helpful POV.  I told him, “Don’t be a tool.”  (But hey, children are notoriously ignorant.)  Clever advertising usually camouflages the true message, which is “Buy this junk food so you can get fat and then buy weight-loss products that don’t work.  (You tool!)”

I was glad SSNM made a reference to that awful (but bestselling) book “Skinny Bitch”, which came out a few years ago.  At that time, I did read the tiny, lightweight tome, and I found the shallow female co-authors to be so annoying, I speculated that if they ever tried to have kids, their babies would probably try to be born prematurely, just to get the hell out of there.

The message of “Scared Skinny No More” is so completely 180 from “Skinny Bitch”.  Mary and Brad validate us by encouraging us to simply be the best version of ourselves that we can be.  In the viewpoint of the authors of Skinny Bitch, if you were not perfect, near-perfect (or somehow “perfectable”), you may as well have been an icky, high-fructose-corn-syrup-soaked tarantula crawling around on a pile of rotting, smelly GMO fruit.

In SSNM, we learn of the different body types, and that we are best served by “embracing” our personal shape.  (My personal advice:  it’s good to literally embrace yourself once in awhile.  Or at least blow yourself the occasional kiss in the mirror.)  Keep in mind that you can never change your basic body type; you can only try to maintain it in its healthiest, most optimized form.  Don’t be envious of those thinner than you; thinness does not necessarily equate to superior health. 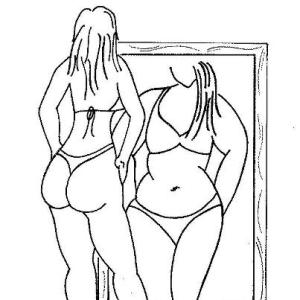 SSNM will help you figure out what body type (or body type combination) you are.  Illustrative examples are given using many of your favorite female celebrities.

How comfortable are you with your place on the food chain?  SSNM explores the concepts of vegetarianism and veganism, and how maybe they’re great in theory, but can be difficult in practice.  One of the big problems is getting enough protein, which is more important than I realized for critical physiological functions.  Turns out my ma was right long ago when she used to berate me at breakfast with, “Where’s the protein?”

SSNM gives us the basic dietary framework that’s beneficial for all humans, and then elaborates upon it for each body type and gender.  I learned quite a few new important factoids.  (And here I thought I knew all the most important factoids associated with this topic, given that I’ve been reading about it for thirty years.)  The chapter on exercise is one of the most illuminating and motivational ones I’ve ever read concerning this much-written about topic.

It’s alarming, but I’m glad someone finally put into perspective just what slugs we humans have become compared to our ancestors.  We need to combat this on both a macro- (societal) as well as a micro- (personal) level.  SSNM gives us the necessary ammunition for the battle, and it repeats that major war cry again and again:  make your bathroom scale the first casualty! 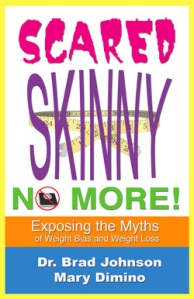 Finally (and always), SSNM is honest with us:  nothing is easy!  So we will be happiest if we can train ourselves to feel gratitude for what we do have.  Even if you don’t initially experience the gratitude attitude in your heart, just trying to feel it is a huge step which causes an enormous shift in the thing that matters most:  not the “magical” number on the bathroom scale, but how balanced and settled your self- (and world-) view can and should be.

If information is power, then “Scared Skinny No More” is one very powerful repast that’s perfect for everyone’s reading diet.

I encourage you to purchase this fantastic book at Amazon.com, and here’s the link:  http://www.amazon.com/Scared-Skinny-No-More-Exposing/dp/1620061856

2 Responses to Objects May Appear Larger Than They Actually Are